SiteSell, a business that has been helping solopreneurs to create successful online businesses of their own since 1997, recently released a review and study of competitor Wealthy Affiliate that has shocking results and implications.

"It's unseemly for one business to review a competitor," said SiteSell CEO and Founder Ken Evoy. "We would normally never do it because such a review would be biased and lack credibility. Therefore, instead of a typical ‘opinion' review, we took it in a completely different direction."

SiteSell designed and performed a scientific-level study and let the numbers do the talking. Why take this unusual approach? It is a response to an organized campaign of fake reviews that was initiated by affiliates of another company, Wealthy Affiliate.

Fake reviews, written as standalone web pages, constitute a well-known and growing problem. And affiliates of Wealthy Affiliate have acquired a particular reputation.

SiteSell CMO Mike Allton adds, "This is a very different problem than the fake reviews in review aggregation sites such as TripAdvisor and even Amazon. This issue has become a cat-and-mouse game of measure-countermeasure."

"But," he notes, "that type of fake is under control due to each company's economic self-interest in featuring trusted reviews. TripAdvisor dies the day that visitors no longer believe which is the best hotel in Puglia, Italy, for example."

In other words, the provider of reviews-as-a-service self-regulates. Those with the most reliable reviews win. But who regulates product reviews that are presented as individual web pages or blog posts?

"Surprise!," exclaims Evoy. "It's Google." Or at least it should be.

He outlines a reasonable argument. Google's job is to deliver the highest-quality, most relevant and useful web pages for any particular search term and its likely search intent. However, many affiliates — some as rogues of honest programs, others due to detailed training (e.g., teaching to include the word "scam" or to find a positive aspect to praise so that the opinion appears subjective) — create fake reviews, enough of which rank in the Top 10 to damage sales of SBI!.

Reviews of Solo Build It! are particularly important to a product such as SBI!.

"Think about it," says Allton. "We are asking the solopreneur who is interested in SBI! to make a serious commitment. It's not the annual fee, as much as it is the opportunity cost of the time commitment, your pride and self-image, and even perhaps facing the opinion of friends and family who ‘told them so.'"

With all that on the line, it's natural to search for reviews. Notes Evoy, "We feel that it's particularly odious to create fake reviews, especially if they lead people to an inferior product. You're playing with people's futures."

Wealthy Affiliate provides its affiliates with a list of 175 products to target, and Solo Build It! is near the top of the list. After finding that list, SiteSell quickly discarded the "rogue affiliate (for an honest company)" theory for some of the fake reviews.

They found a widespread campaign where fake reviews win from 2 to 9 of the Top 10 search results for various searches for reviews about its product name ("Solo Build It!"), its acronym ("SBI!") or for its pre-rebranding name.

Affiliates of Wealthy Affiliate are encouraged to write reviews about competitors and then refer the reader to their Wealthy Affiliate review. Google has prioritized these search results, so the visitor believes the page to be an honest, balanced review. Few, if any, seem to surpass the European Parliamentary Research Service's criteria for a fake review...

A fake review can be defined as a positive, neutral or negative review that is not an actual consumer's honest and impartial opinion or that does not reflect a consumer's genuine experience of a product, service or business.

"The actual content of the so-called ‘review' varies," says Evoy. "But we have yet to see one that is anything more than a quick put-together. The Google searcher has not found a real SBI! review — s/he has unknowingly entered a WA sales funnel, complete with techniques such as fake comments."

"We now know what it feels like to be the Washington Generals," jokes Allton, referring to the patsies who always lost to the Harlem Globetrotters. "We just never seem to win a review and get the recommendation from these guys."

If Wealthy Affiliate really was a superior product, the approach still appears to be illegal. However, the SiteSell team was confident in its product, "especially after examining Wealthy Affiliate's so-called ‘Certification Courses' in detail," states Evoy.

"There are so many positive Wealthy Affiliate reviews written by Wealthy Affiliate members that it's near-impossible to find a negative one. But there's an old saying, "repeating a lie 1,000,000 times does not make it true."

"We guesstimated, based on reviewing their product, that SBI! would be at least several times better. We decided to take it further and discover the truth."

Evoy, a former emergency room physician who had taught and practiced Emergency Medicine at a teaching hospital of Montreal's McGill University, designed a simple but objective, scientific study.

"The most important part," he says, "is that we provide the entire methodology to enable anyone to repeat the study if they don't believe it." In other words, no one can claim that the data is wrong, because they can check it for themselves.

How was that question of bias eliminated? Although they can point out countless reasons why Wealthy Affiliate is inferior, "they all boil down to opinion. So if we needed opinion to make our case, no matter how logical, we'd lose," reasons Allton.

"Heck," he exclaims with a note of exasperation, "we have a ton of verifiable proof of success. They have none. And folks still believe them."

They felt this was a case for numbers, not words, to settle. The Study's results are based on raw data from Alexa, SimilarWeb and SEMrush, 3 well-respected tools that measure site traffic of websites.

Originally conducted in April, they repeated it in May, partially because they feared there could be a great difference in performance. Allton says, "we couldn't spot any error in the methodology or the math. It's all pretty simple, but we did a last-second repeat to see how reproducible the results were."

Aside from the expected minor random deviations, the outcome was identical.  Three highlights from what they call, "The Study"... 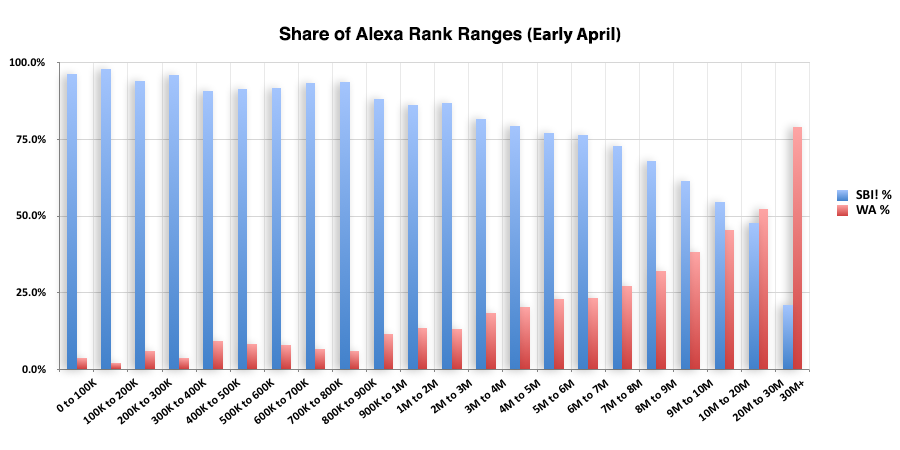 Have there been criticisms of The Study? "Nothing valid and substantive," replies Evoy. Most amounted to "I don't believe it," a statement that seems to be more a sign of brainwashing than rigorous analysis.

Those comments appear mostly in Part 1 of The Study — quite a few disbelieving Wealthy Affiliate users and affiliates. Many threads also arose in the Wealthy Affiliate community, but several of them have been deleted, leaving the ones that favor Wealthy Affiliate, "even though they're wrong," adds Evoy wryly.

As a result of this review and study, Evoy and Allton have determined to raise awareness among consumers and other businesses regarding the dangers of "fake reviews" and "bait & switch" tactics, in general, as well as the potential repercussions for affiliates.

While the affiliate as primary actor is the one who has to live with his/her conscience and direct legal consequence, the SiteSell team has found that many simply re-draw the line between "good person and bad."

Allton notes that "Wealthy Affiliate had told them in the training materials that Wealthy Affiliate was the best, nothing like it, and so forth. So, without looking too deeply, they could feel comfortable using what amounts to an illegal technique to present what they may have believed to be superior. That has changed…

"We have now informed every ranking affiliate of the results — twice. Only one has looked hard and realized the damage he was going to others. He pulled the review. The rest seem willing to trade their soul or reputation and hurt good people who just want to know what the best product is. It's sad."

They have to live with that, as well as potential lawsuits from customers who may only learn of The Study some time after being fooled by a fake review.

What about at the company level?

Wealthy Affiliate, the company, walks its own ethical and legal line. Ethically, it has an obligation to disclose this study and how it relates to its "recommend us because we're the best" advice. "But then again," adds Evoy, "it's our impression that the advice to create what amounts to fake reviews in order to bait-and-switch already runs afoul of the law."

"From a sheerly human perspective, we don't understand how anyone can do this to someone who wants to build a serious online business, growing profits and equity that make a difference to his/her life.

Then Evoy returns to "Google as unwitting accomplice."

"Sadly, fake reviews dominate the online business space. They do so by the law of large numbers and because some of the MMO ("Make Money Online") affiliates have been doing this for a long time and are skilled."

"Nevertheless, the whole scheme only works because Google fails to discriminate the worst type of content imaginable, much of it written at below the "REJECT BY PANDA" low-quality level."

"This is not a small problem. Google's searches that return fake reviews cause loss of money, as well as pain and suffering. It employs fake-review technology for its own commercial Google merchant service. But NOT for search?"

"Frankly," interjects Allton, "I'm amazed that Google has not cleaned out most of the fake reviews. The technology seems to be there. We can see how RankBrain may have to advance a few levels before it picks up the stuff that is good enough to fool the sophisticated reader. But much of this is basic Panda-type junk."

Every affiliate and affiliate program manager for businesses should know that such tactics are immoral and illegal. They should also know that the issue of misleading online advertising is high on regulatory body priorities.

Individual fake reviews represent disparagement of a business's products, goods or services, subject to trade libel laws. A new term called "astroturfing" has emerged to describe widespread fake reviews (either positive or negative) orchestrated by a profiting company or organization. Although it's not a legal term, centrally organized fake reviews constitute misleading advertising.

Consumers who have fallen victim to fake reviews and made ill-informed purchases are taken particularly seriously when they report their case to the Federal Trade Commission or regulatory bodies of other countries (links below).

Here's how to report it to them:

And, of course, you can report high search rankings of fake reviews by Google by clicking "Send feedback" at the bottom of each search results page. Impress upon them that the reported ranking(s) has/have failed them both as weak information and as the very opposite of what their primary function is — to provide high-value, helpful information. Their high ranking adds credibility to some of the worst fake review in existence, helping to perpetuate and propagate what is close to fraud at times.